[DroneTrader.com was started by professional UAV operators and drone shop owners that have been involved in the unmanned aerial vehicle business for close to a decade.

Over the past few years we’ve come across some incredible folks in this industry. We wanted to share some of these stories with you in the hopes that they ignite ideas in our readers’ minds to hopefully propel the drone industry even further ahead.]

Less than a decade ago, completely automated aerial vehicles that could be used by the general public was the stuff dreams were made of.

Fast forward to 2019 and not only have drones been adopted by consumers, UAVs (unmanned aerial vehicles) have been implemented into a wide array of commercial businesses: realtors use drones for aerial views of properties, construction companies are monitoring large construction projects, farmers are mapping their fields, and the list goes on.

These are the uses that many of us involved in the drone industry already know about: aerial photography, mapping, roof inspections, etc…But what about those businesses and individuals that have been working in the shadows over the past years, using drones commercially in some of the most unique and surprising ways?

As any war vet injured by an IED/Mine will tell you, mines are one of the most horrifying nightmares facing our troops today. They are responsible for killing upwards of 10 people per day and can go on killing for many years after wars have ended (often resulting in many innocent civilian deaths).

Current demining methods involve things like sending out animals (mine sniffing dogs) into minefields, using large armoured trucks and even soldiers equipped with metal detectors. All of these methods obviously put both human and animal lives at risk, but up until now these were the only available options.

It was for this reason that brothers Massoud Hassani and Mahmud Hassani decided to build a drone that was capable of decommissioning mines. After a successful Kickstarter crowdfunding campaign the team went to work finalizing their design.

MineKafon also has their own software to track and mark mines in the field for any of their drones as well has their MK Ball demining system.

The company “Mine Kafon” now has several models including the MK Ball, which is essentially a giant “tumbleweed” with built in GPS tracking, that rolls across the landscape and blows up mines.

Airports have long had to deal with the issue of birds flying near airports to prevent bird strikes. It is not uncommon for planes to suck in a bird or flock of birds (think “Miracle on the Hudson”) and lose control of the plane due to engine damage.

Not only is this extremely costly, it is obviously also very dangerous for the passengers and plane.

Some airports use specially trained falcons to control bird populations (more on this later!) but one company went a step further: they use electronic falcon drones to chase away unwanted birds!

They are built by Dutch company Clear Flight Solutions and recently employed by Canadian company Aerium Analytics at the Edmonton International Airport with great success!

Traditionally, feedlots, ranches and farms had to count cattle by hand. Cattle were manually counted as they were processed and passed through a chute.

Obviously this is quite expensive in terms of manpower required, weight loss and stress on the cattle, and simply the time it takes to process thousands of cattle.

One operator, Adrian Moens of AJM seeds, who is based just outside of Lethbridge, Alberta, uses his drone to count cattle for farmers and feedlots. Using a sophisticated drone app called “CountClusters”, he flies his DJI Phantom 4 Pro over feedlot pens and takes high resolution still images of each pen.

He then imports the photos into CountClusters and the software automatically counts the cows using a proprietary AI and image recognition algorithm.

The software can be used to count anything from cattle to trees to pipes and more.

US company Aerones uses their custom built firefighting UAV to rapidly access high floors on apartment buildings that may be involved in a structure fire. Using a tethering system to supply constant water and electricity, the drone can stay airborne indefinitely and provide constant water supply.

Recently drones were used by National Geographic biologists to collect whale snot from humpback whales in Alaska. As the whale surfaced, the drone flew through the “snot” and collected samples of it’s phlegm via Petri dishes attached to the UAV.

The “snot samples” allow them to collect valuable DNA information without disturbing the whale at all.

Using drones for organ transplant literally has the ability to save lives! Recently the first organ to be transported via drone (and subsequently transplanted) was a kidney from the University of Maryland Medical center.

The project was spearheaded by Dr. Joseph Scalea who was often frustrated with the long transport delays for organs and frequent transport issues that were encountered.

The drone was custom built to carry and monitor the organ during the flight. The entire flight took about 10 minutes and gave new life to a patient who had been waiting on an organ donor for over 8 years.

The team is using a custom UAV built by AiRXOS, a division of GE aviation.

This has got to be one of the most awe inspiring uses of UAV technology to date!  Maintenance workers in China are using a custom built flamethrower drone to clear combustible debris from power transmission lines. 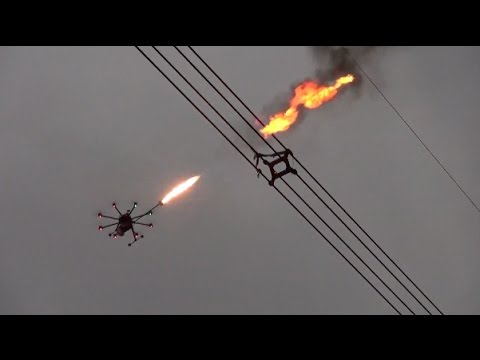 Power lines occasionally  gather unwanted debris blown around by the wind, and large amounts of debris on a powerline can cause damage and loss of power to customers. Prompt and safe removal of the debris is very important.

Traditionally it has been expensive and time consuming to clear debris from powerlines, but by using the latest UAV tech this issue has become significantly more manageable. The company appears to be using a custom built octocopter using DJI flight controller technology.

Some of the benefits that they see in using UAVs instead of traditional manned helicopters is that it is much easier to control exactly where herbicide is placed, far fewer noise abatement issues, and a reduction in on-ground personnel costs.

A company called SkySkopes (located in GrandForks, ND) uses the SharperShape A6 UAV for stringing up powerlines across the USA. Instead of sending up expensive full size helicopters, the company uses drones to quickly and efficiently place transmission lines. 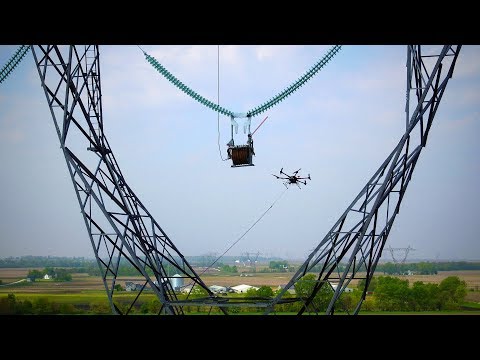 According to the SharperShape website, on average there are currently over 1.5 deaths annually from full size manned helicopter pilots doing the same job. Eliminating the need for a full size helicopter is not only significantly more cost effective but also much safer!

A company based in the USA called DropCopter uses a custom built UAV to replace or assist the work of thousands of bees by pollinating orchard crops such as almonds, apples, cherries and pears.

Why not leave it to the bees?

Something called Colony Collapse Disorder has recently led to the eradication of close to 50% of the world’s bee population, leading to a decline in pollination rates. DropCopter aims to bridge the gap by using autonomous aerial vehicles to consistently and precisely pollinate crops. 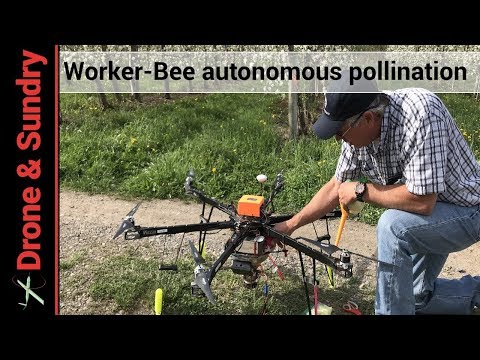 Steve Schwartze is a professional falconer and wildlife consultant located in Lethbridge, Alberta. Steve rehabilitates and exercises his birds using a variety of drones pulling lures through the air.

The drones pull a long lure with bits of bird (typically pigeon) through the air and the falcons chase this down instinctively.

Steve says that injured birds will typically be able to double the altitude they fly every day and will quickly reach heights of 1000′ or more.

Steve uses drones such as the DJI Phantom series to train his birds.

Nestled deep in the Okanagan valley in British Columbia is the home of the Okanagan-Kootenay Sterilized Insect Release Program. This program has for years been dispersing sterilized moths to control the abundant pests. These sterilized moths mate with the existing moths but do not produce any offspring which in turn reduces the population.

Traditionally the moths were dispersed using Cessna planes but the terrain made it too difficult to continue with this. They then switched to all terrain vehicles which was time consuming and costly.

Recently they have been dispersing the moths using a custom built UAV that precisely disperses the moths. The UAV can cover around 40 acres in a single flight.

Large agricultural operations such as dairy farms are subject to strict environmental regulations when the farms become large in size. When a farm reaches CAFO status (Concentrated Animal Feeding Operation), there are many rules in place regarding drainage and animal waste control (large amounts of dairy cattle produce large amounts of waste!).

CAFO planners use drones to topographically map their dairy farm to generate elevation maps showing drainage and runoff patterns. These farms must follow strict guidelines regarding waste distribution and routing, and having a up-to-date topographical map done by a drone greatly assists in this planning.

Some companies, such as Aurox, use drones on the dairy farm for everything from counting cattle, to volumetric measurements of feed stockpiles, to mapping for drainage patterns, to dairy farm equipment inventory and much more!

Cleaning skyscrapers in large metropolitan areas has traditionally been very costly and potentially hazardous to labourers.

US company Aerones uses a custom built AD28 UAV with a ground based water and electrical tethering system to pressure wash high rise windows using demineralized water. A series of protective wheels on the front of the UAV ensures that the building is not damaged by the drone, and a steady supply of water and power from a base station ensures that the Aerones UAV can clean buildings for extended periods of time.

The Spanish firm MuDD recently used drones to spray shotcrete (a form of concrete) at a framework that supported the concrete to form small dwellings and shelters.

The maneuverable drones make quick work of putting up small but sturdy structures.

The company is working to scale and automate the shotcrete application process to expand to building larger structures such as skyscrapers or replacing facades on aging buildings.

Arizona fire personnel working on the Maroon Fire recently employed a DJI M600 aerial platform to ignite controlled burns to direct the spread of fires in the area.

The UAV carried a hopper of spheres that would burst into flame about 30-45 seconds after they were released, igniting fires where firefighters wanted to control fire spread and limit wildfire growth.

The list of uses for drones is quickly expanding, and if you know of anything unique that should be added, please don’t hesitate to contact us so we can add it! We hope you learned something interesting today!

Some other interesting posts we have on the blog are “Where to Rent Drones” (great if you are interested in renting a drone prior to purchasing) and “Unique Drone Apps and Software.” Check them out!